‚Faces of Masking‘ is an international cooperation of social scientists that analyses practices and narratives of masking during the Covid-19-pandemic and explores alternative formats of presenting scientific results by including visual arts.

Although most people seem to agree with the idea that wearing masks would protect others and keep infection rates low, there is also resistance. ‘Community masks’ have become much more than mere objects of medical purpose. Especially the protests in several places bring to light how the mask has not only various meanings within the pandemic but also how they have changed over time. At the beginning, when masks were scarce worldwide, their wearers considered as selfish hoarders and their effectiveness questioned, while presently, when they are mandatory (Germany) or recommended (Finland), people without masks are considered as lacking solidarity. While in Germany we can see resistance, in Finland there is an expectation of voluntariness. Thus, in addition to discussing the protective effects, it is also important to discuss their socio-material dynamics.

„Before drawing and writing were separated they were conjoined.“

The creation of our header illustration in fast motion (© S.Vetter).

„Collaborations between social science and arts“ at the Finnish Symposium for Science and Technology Studies. The conference will be held in Helsinki, 9-10.6.2022, Deadline for Abstract submissions is the 1st of April. We are looking forward to your contributions!

Böhrer, A./Döbler, M.-K.: Interactive talk at the International Musem Day in cooperation with the Medical History Musem of Ingolstadt, 17.05.2021.

Böhrer, A./Döbler, M.-K./Tarkkala, H (2021).: „Thinking in pictures: Methodological reflections on a dialogue of sociology and visual arts“, Meeting of the Society for the Social Studies of Science organized from Toronto/Online (4S), October 6-9.

In this section, we are going to collect sketches and ideas that came and come up in the process of analysing different ‚mask stories‘. What we call ‘stories’ is a collection of repetitive narratives and comparable story lines based on a sample of research material from 2020 (consisting of newspaper articles, tweets and posts in social media, pictures, flyers, recording/documentation of stories told to us in everyday life as well as ethnographic field notes and short memos). Slowly these sketches are going to develop into illustrations. As this will not be part of the final article we would like to document and share their development here.

An important part of our reflection upon masking is that masks and masking practices are variable and dynamic. There isn´t such thing as ‘the mask’, as there are various shapes, colors, materials, qualities, and masking practices at the same time and over time in the ongoing process of the pandemic. They are “more than one and less than many” (Annemarie Mol).

Susi suggested that the article would need a visual header and made a first quick collection of practices that she observed on everyday life and some that she got from our collection of ‘mask stories’. 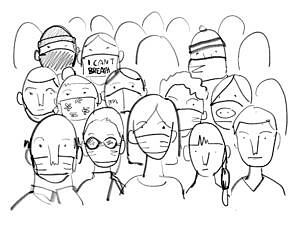 This sketch led to a discussion about more possible practices that we can´t see on this picture yet and about the display of people in illustrations (skin color, gender, age etc.). The image highlights a certain aspect for thinking about masks: We are not thinking about masks but about hybrids of masks and humans. 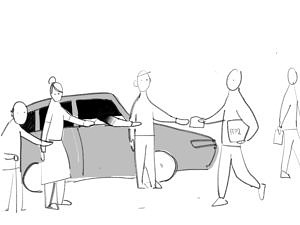 In 2020 we started to create an archive of mask stories and selected three of them for our article. What we call ‘The Volvo incident’ took place in Finland last summer when several newspapers reported a situation that involved a pick-up station, free masks and a new Volvo. The sketch made as think what is actually at stake in this situation and what is the role of the car here. Fun fact: all three German project members had to google what a Volvo actually looks like. 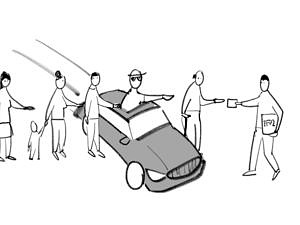 After discussing the Volvo Story again, Susi came up with sketches that are more fokussed on the social figure of ‚the hoarder‘ that we found in the story: 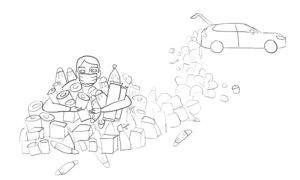 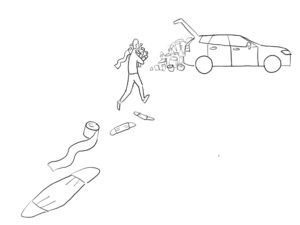 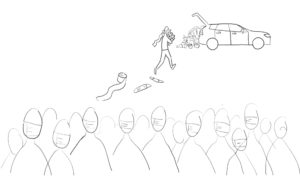 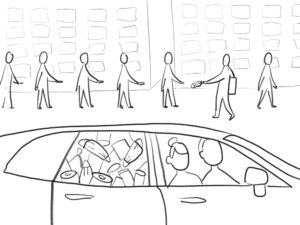 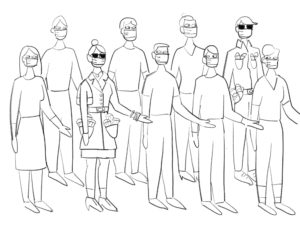 Picturbook about the Volvo discussion (***with sound***). 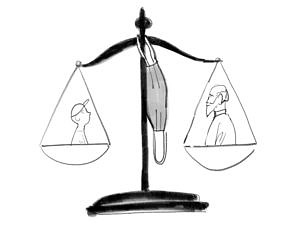 The second story is based on a flyer that ended up in Marie-Kristin´s mailbox in autumn 2020 when after the summer break and some months of home-schooling schools were supposed to reopen. Wearing a mask was obligatory, first for two weeks/for older students. In different places, this obligation has been extended both timewise and concerning younger school kids. The reactions to this were mediocre, some kids annoyed, some parents concerned, the effectiveness of the masks was challenged. The protection of children became an important argument for members of the so called Querdenker movement and other people who were sceptical of the political measures during the pandemic.

Our third story is about travelers, chocolate Easter bunnies and Santa Clauses who have something in common: They got facemasks put on them. The fact that these characters (the figure on a Finnish bread package and the German sweets for Christmas and Easter) were masked, not only caused storms of enthusiasm, but also criticism. What could be behind this, is going to be investigated in our article and Susi already came up with some sketches. Can you imagine what it’s all about? 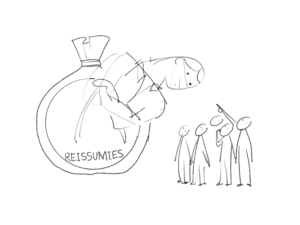 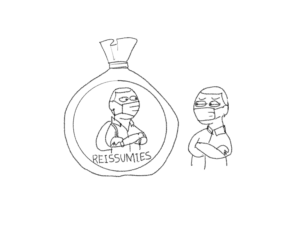 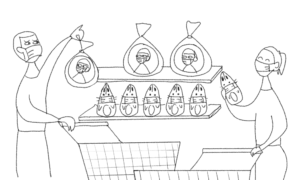 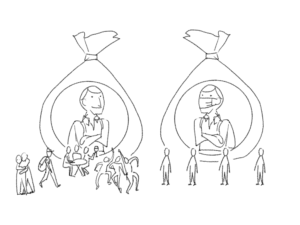 In our discussions we started to wonder if it is possible not to take a normative position when we describe and depict the stories we found. When discussing the couloured illustrations (that you can not see here) we continued this discussion about ethics of representation. Questions about skin tones, gender etc. were raised. Is it important that this or that person looks male of female? Do blue and green people look like some sort of aliens?

Otherwise, so far we can say that when all these discussions and sketches finally start to turn into colourful illustrations it is kinda magic. We keep you posted!

Creating a timeline of masking that shows Germany´s and Finland´s different takes on facemasks has been the most challenging task. We tried to start with a very ’simple‘ skeleton which turned out not be simple at all… 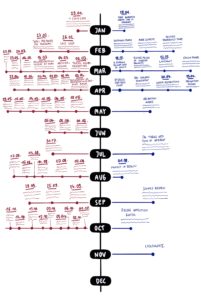 What dates, incidences and quotes were supposed to be part of the illustration? What is important? Moreover whe noticed that we had collected different of data on the German and Finnish side, so it was unexpectedly hard to compare them. Moreover, it wasn´t easy at all to cast all of it into a short and informative text. After a history of discussion, new idea, failure and new ideas, we managed to create timeline that depicts the fluidity of masks and the developement of masking throughout the year 2020.

***You can see all the finished illustration soon in our article.

In the winter semester of 2021/2022, we explored and discussed the possibilities and limitations of drawings and illustrations for qualitative sociological research together with students from FAU in the seminar „Zeichnerisch Beobachten“ (=drawing observations). The first task was to observe everday-life situations, experiment with different kinds of visualisiations and reflect on what could be the role of the drawing for their observations (like memory aid, documentation, illustration/explanation for potential readers, drawing I want to discuss with interviewees, etc.).

We quickly found out that it’s not a matter of being particularly crafty in drawing (although most of the students are). 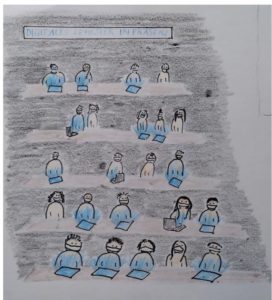 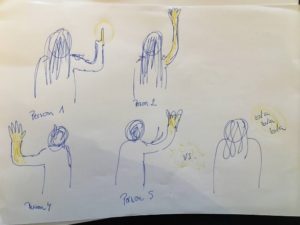 A story can be told with very simple lines; a simple highlighting can clarify which aspect of a situation we were particularly interested in.

Drawings have an important characteristic that distinguishes them from photographs: they depict what is seen through the filter of the person observing, contain their interpretation of the situation, and give the opportunity to emphasize certain aspects in an „unrealistic“ way. 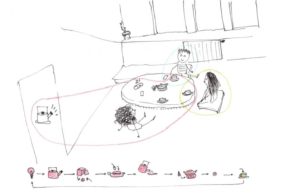 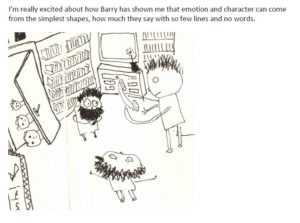 Many of the drawings we received in the seminar contain original ideas of depicting the situation and elements that make us curious.

However, some also seem to have a really clear message: 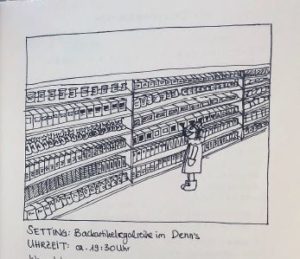 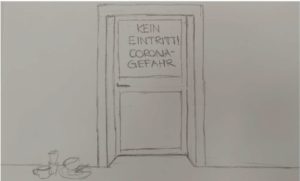 Some fit a whole story in one picture: 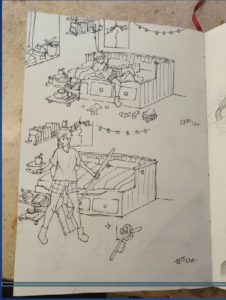 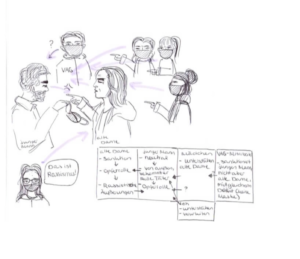 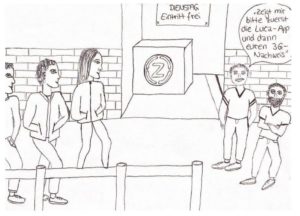 And many are dealing with the changes brought about by the pandemic: 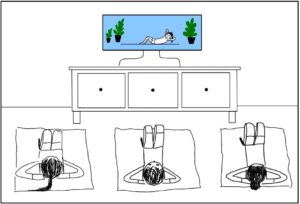 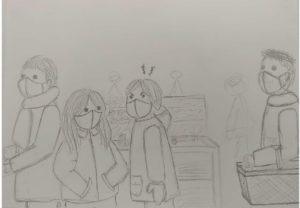 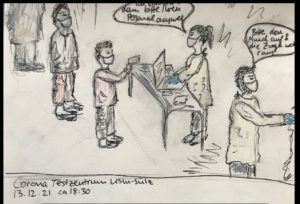 …doing Covid tests every now and then… 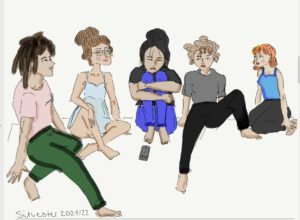 …or getting a positive test result when you did not expect it at all.

Crowd research on masking during the pandemic (University of applied Sciences Fulda):

Collection of  ‚Everyday Experiences of the Covid-19 Pandemic‘ (University of Helsinki):

Mask collection of the Medical History Musem in Ingolstadt: